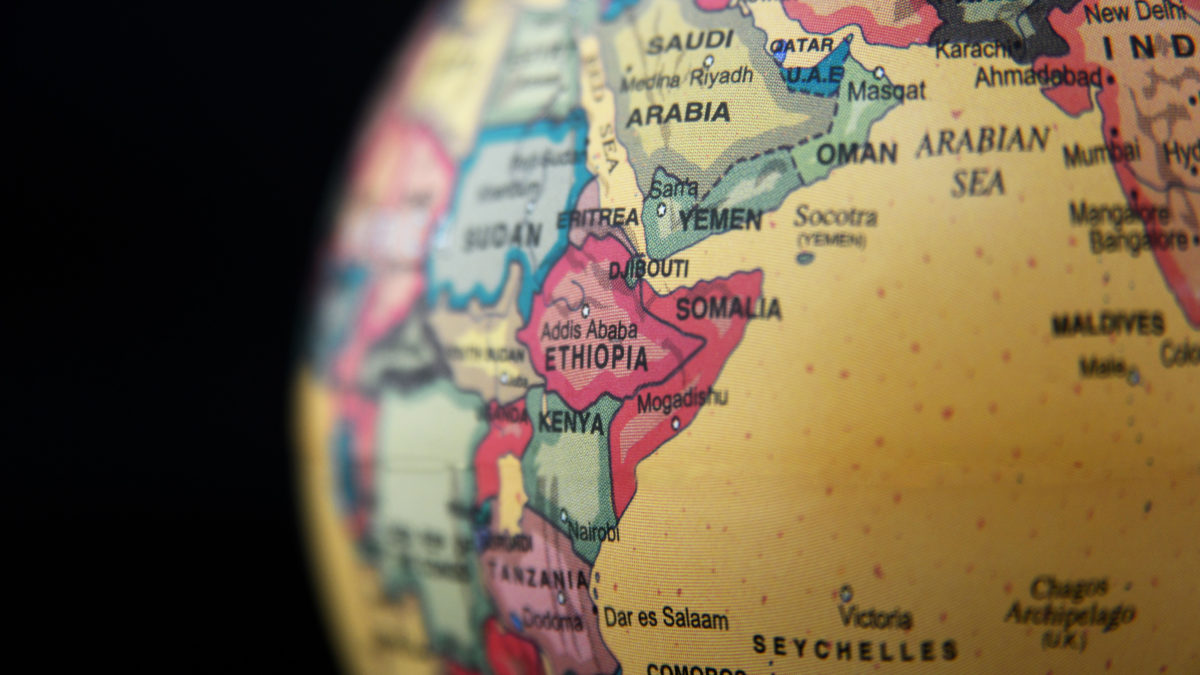 Map of Ethiopia and Somalia

As different countries seek to exert influence in the Red Sea and the Gulf of Aden, political divisions of the Middle Eastern Gulf are being played out along the coastline of North East Africa exacerbating regional tensions.

Since the end of the Cold War, Djibouti has presented itself as an island of stability in a volatile region and has become a favoured destination for overseas military bases. The USA, France, Italy and even Japan have set up bases in the country. Additionally, Germany and Spain have troops stationed at France’s base. In 2017, these countries were joined by Saudi Arabia and China. While China has maintained that its base is primarily for supporting its peacekeeping and humanitarian missions, Saudi Arabia’s base is closely linked to its competition with Iran and its involvement in the current conflict in Yemen. Although Saudi Arabia and Djibouti have long been close allies, the establishment of a military base in the country has drawn the Horn of Africa closer to the conflict in Yemen and the wider power struggle in the Middle Eastern Gulf.

Moreover, it seems that Djibouti is no longer alone in providing leases for military bases in the region. In 2017, Saudi Arabia and the United Arab Emirates (UAE) established a joint military base at the port of Assab in Eritrea, which has been used by the Saudi-led coalition in the conflict in Yemen. Subsequently, Eritrea has become an ally of Saudi Arabia and the UAE in their diplomatic dispute with Qatar. It appears that this base is part of the UAE’s wider strategy of commercial and military expansion in the Horn of Africa. The country already has a military facility in Somalia and it is set to complete a military base in the self-declared state of Somaliland in June 2018. This base is situated near the port of Berbera, where a UAE-based company – DP World Ltd – secured a 30-year concession to manage and develop the facility in September 2016. Similarly, another UAE-based company – P&O Ports Limited – secured a 30-year concession to develop and manage the port of Basaso in the semi-autonomous region of Puntland in north eastern Somalia in April 2017. Given what happened in Somaliland, there are suspicions that another UAE military facility could be established in Puntland.

Nevertheless, investment in these ports should be beneficial to the local economy and could open up new trade corridors for landlocked countries such as Ethiopia, which are overly dependent on access to the Port of Djibouti. This has been anticipated by the government of Somaliland, which plans to construct a road from Berbera to the Ethiopian border and are reportedly in negotiations with the Ethiopian government over further investment in the port. Given Ethiopia’s position as the fastest growing economy in the region, this increased access to trade routes is likely to have a beneficial effect on local economies.

While Saudi Arabia and the UAE have established a foothold in the Horn of Africa, it appears that their rivals have gained ground further north. On 26th December 2017, it was announced that Turkey secured exclusive rights to the port island of Suakin from Sudan for the next 99 years. Turkey reportedly plans to restore the historically significant island, which, since the construction of the Port of Sudan in 1922, has been largely abandoned. Although Turkey have stated that the rehabilitation of Suakin is commercial in nature, the decision has raised concerns in Saudi Arabia and Egypt, who suspect that Suakin may serve a military purpose. This is unsurprising, given that Turkey has maintained relations with Iran and is a close ally of the embattled Qatar. Furthermore, only days after this announcement, Turkish, Qatari and Sudanese army chiefs met in Khartoum. While the details of this meeting are unknown, it increased the level of distrust in Egypt and Saudi Arabia, where it has been alleged that Qatar funded the Suakin deal.

Consequently, there is a danger that the Horn of Africa will be increasingly drawn into the ongoing conflicts in the Middle Eastern Gulf, both diplomatically and militarily. Since the beginning of their dispute with Qatar, Saudi Arabia and the UAE have been applying pressure on countries in the region to either cut ties or downgrade diplomatic relations with Qatar. Thus far, Egypt, Eritrea, Djibouti and Somaliland have sided with the Saudi-UAE coalition, while Ethiopia, Somalia and Sudan have remained somewhat neutral. However, each of these countries continue to face diplomatic pressure from both sides of the dispute.

This was especially evident during the presidential election in Somalia in February 2017, which was hampered by corruption allegations that were closely tied to the Middle Eastern Gulf dispute. The UAE, Saudi Arabia, Qatar and Turkey were all accused of funding presidential candidates in Somalia to secure influence in the country. The winning candidate and now president – Mohamed Abdullahi ‘Farmajo’ Mohamed – reportedly received funding from Qatar. When this is combined with reports that Turkey has overtaken Somalia’s traditional aid donors and constructed its largest overseas military base in the country, it appears that Qatar and its allies now have the upper hand in Somalia.

Aside from the diplomatic dispute with Qatar, there is also a possibility that countries in the Horn of Africa could be drawn into the conflict in Yemen. On 24th December 2017, Houthi rebels released a video online in which a commander threatened Somaliland against continuing its lease agreement with the UAE. They reportedly stated that “if Somaliland does not heed the warning then we will fire ballistic missiles to Somaliland”. Although Houthi rebels have not yet attacked either Djibouti or Eritrea, despite their assistance to the Saudi-led coalition, given the proximity of the Horn of Africa to the conflict, this is a threat that could be acted upon, if the rebels altered their tactics.

Nevertheless, the greatest concern for North East Africa is the effect this will have on regional tensions. In Somalia, the UAE’s decision to negotiate directly with the governments of Somaliland and Puntland could prove to be highly contentious. Despite its self-declared independence, neither Somaliland nor Puntland are recognised as independent countries and, consequently, there are questions regarding the legality of the UAE’s negotiations, which have already been raised by the government of Somalia. Given Somalia’s current security situation, it is unlikely that such questions will be addressed in the short-term; however, the continued vying for influence by Qatar, Turkey and the UAE in Somalia and Somaliland is only likely to deepen divisions and cause further problems for state building initiatives in the region.

Beyond the Horn of Africa, the politics of the Middle Eastern Gulf has helped renew hostility between Egypt and Sudan. Turkey’s control of Suakin and the meeting between Sudanese, Qatari and Turkish military chiefs has raised serious misgivings in Egypt. While, as of the time of writing, the Egyptian government has stayed quiet about the matter, the pro-government press has condemned Sudan. It appears that, given the deterioration in relations between the two countries over the past year, Sudan’s Suakin policy is considered an offensive action focused on the disputed Hala’ib Triangle. Accordingly, it is likely that border tensions will increase, especially if Sudan develops closer military relations with Turkey.

This retrogression in the relations between Egypt and Sudan has wide-reaching implications for North East Africa. Currently, Egypt, Sudan and Ethiopia are trying to break a deadlock in negotiations regarding the Grand Renaissance Ethiopian Dam (GERD). Talks broke down in November 2017 and, at the time of writing, there is little indication that they will restart soon. This was illustrated by reports on 2nd January 2018, that Egypt wanted Sudan excluded from the talks, which were quickly denied by the Egyptian government. This is troubling as already 62 percent of GERD has been constructed and it is set to be completed by the end of this year. It appears that Sudan is now likely to side with Ethiopia in negotiations, which would isolate Egypt. This will widen divisions between Egypt and Sudan, as well as Egypt and Ethiopia.

Although such divisions existed prior to the influence of politics in the Middle Eastern Gulf, this factor has definitely heightened tensions in the region. Due to Egypt’s support for the Saudi-UAE coalition, and possibly Turkey’s Suakin concession, on 4th January 2018, Egyptian troops arrived at the UAE military base in Eritrea and have since been stationed there. Seeing this as a direct provocation, Sudan closed its border with Eritrea on 6th January. It appears that battle lines are being drawn between Egypt and Sudan, and, given the GERD negotiations and its history of conflict with Eritrea, its highly likely that the recent troop movements will further aggravate tensions between Ethiopia and Egypt.

The investment in North East Africa by Turkey and countries of the Middle Eastern Gulf is undoubtedly going to have a positive effect on local economies and create further investment opportunities. In order to secure the Suakin concession, Turkey has reportedly agreed to invest $650 million in Sudan, which will include funding for the construction of a new airport and investment in a range of sectors, including electricity production – a burgeoning sector in the region. While DP World Ltd and P&O Ports Limited are respectively investing $442 million and $136 million in Somaliland and Puntland. Given the economically underdeveloped nature of the region, such investment will be highly beneficial and will create further opportunities, which is reflected by the increase in the price of land in Berbera. Furthermore, the development of new ports in the Horn of Africa will be advantageous for Ethiopia, which will be able to reduce its dependence on Djibouti and develop new trade routes. Given that, according to the World Bank, Ethiopia was the World’s fastest growing economy in 2017, the development of such trade routes should create further investment opportunities in the region. Additionally, even the construction of military bases along the coast should increase investment in local infrastructure, which is currently inadequate, and therefore create a better investment environment.

That being said, the influence of the politics of the Middle Eastern Gulf is currently, and will continue to, have a negative impact on regional divisions. The exacerbation of underlying tensions in an already volatile region has the potential to cause unrest and conflict, which will exhibit itself in varying degrees depending on the countries involved. Despite significant interference in Somalia and its disputed neighbouring regions, considering the current security situation in the country, it is unlikely that this will have a pronounced impact in the short-term. Nevertheless, it will hamper long-term state building initiatives. With regards to Eritrea and Djibouti, Qatar’s withdrawal has definitely increased the prospect of border clashes; however, given the strategic importance of the two countries to the Saudi-UAE coalition, there is a distinct possibility that the UAE will try to assume Qatar’s mediation role.

The most significant concern for the region is the escalation in tensions between Egypt, Sudan and Ethiopia. Emboldened by the apparent backing of Turkey and Qatar, Sudan may try to seize control of the Hala’ib Triangle, which will not be easily relinquished by Egypt. If this were to happen, given that Egypt currently has troops stationed in Eritrea, clashes on this border and in the Hala’ib Triangle should be expected. Moreover, this escalation in tensions will put additional strain on the already fraught GERD negotiations. Taking into consideration that Egypt relies on the Nile River for 95 percent of its water supply and it has been estimated that GERD could reduce the flow of water to Egypt by 25 percent, a failure to reach an agreement could be disastrous and it is unlikely that Egypt would accept this outcome. However, in light of the deterioration of Sudan’s and Egypt’s relationship and the stationing of Egyptian troops in Eritrea, an agreement seems increasingly unlikely. If Ethiopia and Sudan fail to reach an agreement with Egypt, conflict between the countries is not beyond the realm of possibility.