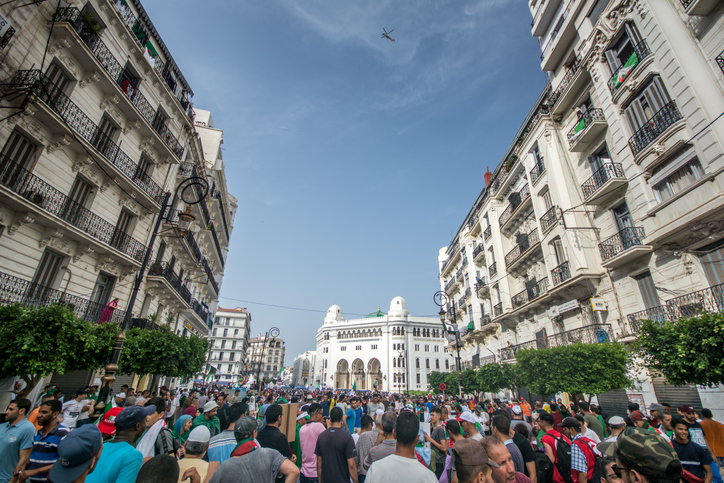 On 21st February 2020, thousands of protestors filled the streets of Algiers to mark a year of anti-government demonstrations.  Protests were twice weekly during this period and, despite the resignation of long-term President Abdelaziz Bouteflika, showed little sign of abating until the Covid-19 pandemic reached Algeria.  In response, the government banned political demonstrations and leaders of the protest movement – known locally as Hirak – urged people to stay at home to slow the virus’s progress. On 13th March, for the first Friday in 56 weeks, the capital’s streets did not host any anti-government demonstrations.  There is no prospect of their early return, as the country grapples with Covid-19.

A twice delayed presidential election finally took place on 12th December 2019, with Abdelmadjid Tebboune elected president.  The former prime minister stood as an independent candidate and promised reforms, but such commitments were disregarded by Hirak and most opposition parties, which boycotted the election.  With a turnout of less than 40 percent, Tebboune lacks a strong mandate.  In the eyes of many, he represents the interests of the country’s powerful military, the Armée Nationale Populaire (ANP).  Tebboune’s reforms have been dismissed as cosmetic and, while the new government has a more civilian make-up, it remains dominated by Bouteflika era figures and is seen as under the influence of the ANP.  Consequently, despite government calls for dialogue, Hirak was gaining momentum before being halted by Covid-19.

The restrictions on public gatherings provided welcome relief for Algeria’s ruling elite and afforded it an opportunity to regroup.  It has used this to its advantage, co-opting anti-Covid-19 measures as tools of repression.  Many Hirak activists have been detained by police since the start of the outbreak in Algeria and those already detained were noticeably absent in the recent coronavirus-motivated presidential pardon of over 5000 prisoners.  The well-known journalist Khaled Drareni was among those detained and concerns about press freedom were reinforced by the closure of three online news websites and the announcement of draft legislation to criminalise “fake news”. Additionally, Algerian courts have apparently exploited the international distraction caused by Covid-19 to sentence prominent Hirak supporters, including the leader of the opposition Union Démocratique et Sociale (UDS), Karim Tabbou.

Repression tactics and disruption of weekly protests has certainly weakened Hirak.  However, the movement remains united in its opposition to the government.  And reports suggest that many Hirak activists have dedicated themselves to supporting vulnerable people affected by Covid-19.  Such activities will help the movement to stay unified and broaden its support base, especially considering governmental failings.  Algeria currently has the highest number of Covid-19 deaths in Africa and, while the government faces increasing criticism, such community-based strategies are likely to be very popular.

Furthermore, although the ruling elite has capitalised on the Covid-19 outbreak, its efforts are likely to be undermined by the economic impact of the virus.  The struggling economy was already one of the causes of protests.  The IMF forecasts a 5.2% contraction in GDP, given the falling oil price.  The government had already planned a 9 percent cut in spending this year, based on an oil price over double the current level.  Further cuts seem inevitable, leading to higher unemployment, which will foster political unrest.

Thus, while Covid-19 has temporarily provided Algeria’s ruling elite with the upper hand in its year-long battle with Hirak, it is likely that the protest movement will find a weakened adversary and perhaps further public support when political demonstrations are once-again possible. That said, it remains to be seen whether it can maintain its peaceful posture in a post-coronavirus Algeria.