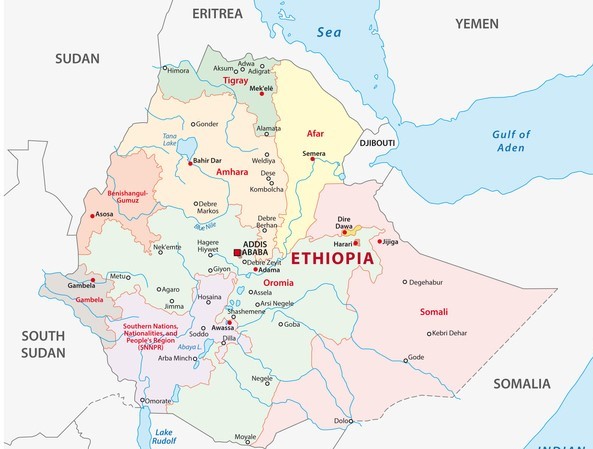 On 2nd April 2018, Abiy Ahmed became Ethiopia’s prime minister. His reformist agenda and promise of uniting Ethiopia after three years of violence and unrest was welcomed both domestically and internationally. This culminated in Abiy being awarded the Nobel Peace Prize in October 2019 for his role in securing a peace deal with Eritrea. However, even by this point, his popularity was starting to wane in Ethiopia and ethnic tensions were re-emerging, as Abiy’s government sought to deconstruct the country’s unique ethnic federalist system of government. These tensions came to a head in November 2020, when Abiy launched a military offensive against the once powerful Tigray People’s Liberation Front (TPLF); a move which has emboldened the prime minister but damaged his international standing.

The TPLF had long been a thorn in Abiy’s side. A conflict between the party and the central government had been brewing for some time, particularly after the constitutionally questionable dissolution of the Ethiopian People’s Revolutionary Democratic Front (EPRDF) in November 2019 and the TPLF’s subsequent refusal to join Abiy’s new pan-ethnic party – the Prosperity Party (PP). Antagonism between the two parties grew throughout 2020 and, therefore, it was not a surprise when the TPLF disobeyed the central government’s order to postpone the general election; a decision which sparked the current conflict in Tigray.

In Ethiopia, there is very little opposition to Abiy’s military offensive in Tigray. Given its historic domination of the EPRDF and the repression associated with this regime, the TPLF has few allies in Ethiopia’s other regions. And, as the conflict started with an attack on an Ethiopian military base by TPLF-aligned forces, Abiy’s military response is widely seen as justified.

In contrast, the international community has been critical of the Ethiopian military’s intervention in Tigray. Serious concerns have been raised about human rights abuses by NGOs and international bodies have condemned the government’s decision to block humanitarian aid from accessing the region. This even led to the EU suspending its budget support for Ethiopia on 15th January. It is estimated that over 75 percent of the population of Tigray requires emergency food aid and the head of the UNHRC has claimed that there are “concrete indications of major violations of international law” by the central government. Moreover, concerns have been raised about Eritrea’s apparent role in the conflict, with the outgoing US Ambassador calling for an independent investigation into alleged human rights abuses attributed to Eritrean forces. As a result, the UK foreign secretary Dominic Raab has warned that the current situation risks tarnishing Ethiopia’s reputation. This was not helped by the killing on 13th January of Seyoum Mesfin – Ethiopia’s former foreign minister from 1991 to 2010 – which sent shockwaves throughout the diplomatic community.

Abiy has largely dismissed such criticism, stating that the international community should “stand by” until the central government calls for assistance. It was widely predicted that Abiy’s military offensive in Tigray would lead to a protracted conflict, but this has not been the case. Federal forces seized the region’s capital Mekelle within less than a month and, although it is likely that a low level TPLF insurgency will continue in the region, the intervention has been a decisive victory for Abiy. As the TPLF presented the greatest domestic threat to the Abiy administration, this victory has emboldened the prime minister, which is reflected in his dismissal of the international community. It is likely that it will also provide Abiy with the confidence to dismantle further the ethnic federalist system of government and increase the centralisation of power. This will almost certainly increase regional unrest as, although the PP is a pan-ethnic party, it is widely seen as serving the interests of the Amhara ethnic group. And, given Abiy’s military success in Tigray, the potential for military interventions in other regions has certainly increased.

Consequently, the election scheduled for 5th June will be a major test of Abiy’s commitment to his reformist agenda, which gained him significant international support and increased investor interest in Ethiopia. Political and ethnic tensions will be heightened during the election campaign and Abiy’s response to the corresponding regional unrest will determine the future stability of Ethiopia and its a position as a destination for international investment. There is nothing to suggest that Abiy will depart from the liberalisation of Ethiopia’s economy; however, the conflict in Tigray has shown that he is not afraid of using military force, even where it risks alienating the international community and potential investors.